The Message of Two Cornstalks

This morning as Mim and I were walking Abbey I asked Mim if she had any ideas for me to write about in today’s blog. She responded, “How about the two cornstalks growing next to the road at Whispering Winds? Remember Jesus talked about seeds that fell on good ground.”

It’s actually been kind of fun watching those two stalks of corn grow this year on the edge of the lawn, right along the roadside. Last winter the snowplow scraped the edge of the lawn as it barreled along Highland Road. A few chunks of sod were torn out of the lawn. We added some soil and sowed some grass seed over the damaged area in the spring, but as dry as the spring and summer was, the seed never germinated. Last year there was a cornfield across the road. (This year it’s soybeans.) Somehow a couple kernels of corn found their way onto our patch of open soil that had been unwelcoming of the grass seed. The corn sprouted easily, and two proud stalks of corn have been growing all season. Mim decided to mow around them to honor their persistence. Despite the drought in our area of Wisconsin, these two plants of field corn have done fairly well. The wildlife (raccoon, probably) have enjoyed a good harvest.

So what did Jesus say about seeds? In Matthew 13:1-9 (New Revised Standard Version):

That same day Jesus went out of the house and sat beside the sea. Such great crowds gathered around him that he got into a boat and sat there, while the whole crowd stood on the beach. And he told them many things in parables, saying, “Listen! A sower went out to sow. And as he sowed, some seeds fell on the path, and the birds came and ate them up. Other seeds fell on the rocky ground, where they did not have much soil, and they sprang up quickly, since they had no depth of soil. But when the sun rose, they were scorched, and since they had no root, they withered away. Other seeds fell among thorns, and the thorns grew up and choked them. Other seeds fell on good soil and brought forth grain, some a hundredfold, some sixty, some thirty. Let anyone with ears listen!”

Jesus’ disciples asked him what he meant by this story. Apparently, it wasn’t just about growing corn to feed the raccoon family. In verse 23, Jesus explained, “But as for what was sown on good soil, this is the one who hears the word and understands it, who indeed bears fruit…”

So, what is God trying to tell us by having two cornstalks grow on the good soil on the edge of our lawn at Whispering Winds? Perhaps, it’s as simple as “Take time to smile at the little miracles we see all around us.” Or maybe, to some people driving by, the message is “Bloom where you are planted.”  Or to others, it’s “See. God really watches out for the needs of her creatures, even the raccoon.” 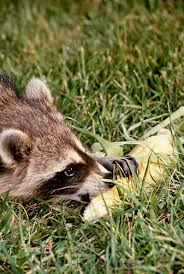 One response to “The Message of Two Cornstalks”