I learned a new word last week – “mirabilary.” Well, it’s not exactly a new word – just new to me. The dictionary (if you can even find it in your dictionary) says it’s obsolete. The 101-year-old 1913 edition of Webster’s Revised Unabridged Dictionary defined it as, “One who, or a work which, narrates wonderful things, one who writes of wonders.”

I came across the word in one of Edward Hays’ books, A Book of Wonders: Daily Reflections for Awakened Living. The title of the reading for April 3 is “A Mirabilary.” Here’s the reading – it’s short, only a paragraph:

We are wonderstruck when we’re caught off guard by some amazing or surprising thing or person. Unlike being lightning-struck – which is lethal – being wonderstruck is life-giving and spirit-arousing. If God is the Wonder of Wonders, then to witness any wonder is to have a divine visitation. These are more common than is believed. Admiration is to wonder, to be awed when people act heroically, selflessly, or generously. Normally, we have low expectations of our fellow humans. The unexpectedness of such behaviors are visitations of wonder. We capture this by calling them a “bolt out of the blue,” linking them to lightning. Become a bolt out of the blue yourself by being a mirabilary, an uncommon synonym for wonder-worker. Today, surreptitiously plot to be a mirabilary by being a one-person divine visitation. In unexpected places and times, act in a surprisingly unselfish, noble, or heroic way.

The daily reflection ended with this prayer:

Inspire me to perform surprise deeds of unexpected kindness and generosity for strangers, friends, or family, and so be your wondrous bolt out of the blue.

So, last Thursday I plotted to be a mirabilary. This was even better than April Fools. Instead of trying to trick Mim and everyone else in our household with an April Fools joke, I tried to figure out how to be unusually and unexpectedly nice to them. After doing a couple of nice little things – complimenting Ann on how pretty she looked in what she was wearing that day and asking Mim if she’d like me to make Ann’s coffee for her – I told Mim what I was planning to do – to surprise everyone by being extra kind. Mim decided to join me, and we had a great day being mirabilaries together.

Much to my surprise, trying to be mirabilaries is becoming a habit, something we catch ourselves doing every day. The neat thing about being mirabilaries is that this habit is giving us as much joy as the “victims” of our kind deeds. 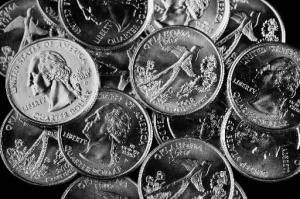 On Sunday afternoon Mim and I went to a Madison Symphony Orchestra concert at the Overture Center in Madison. We drove to the parking garage where we usually park, next to the Overture Center, but it was full. We drove around a few blocks looking for street parking – without success – so we tried another parking garage. This was the garage where you have to pay by feeding quarters into meters, ten minutes per quarter. Fortunately, I had a handful of quarters in my car. I fed the meter enough quarters to give us three hours of time. I had two quarters left in my hand. I was about to put them in my pocket when Mim said, “Why don’t you give them to those people.” The people in the car next to ours were scrounging through their purses and pockets to try to find more quarters. I walked up to the woman standing by the meter and asked her, “Do you want two more quarters?” I think she and her companions were shocked. She explained that they were going to the symphony but couldn’t get into their usual parking garage. They didn’t know they would need quarters. She gladly accepted my two quarters and fed them into her meter. Mim and I walked away feeling good about being generous with our left over quarters, and our “victims” were delighted to get a couple of quarters from complete strangers.

That was our “50-cent thrill” of the day. Oh, the joy of trying to be “a wondrous bolt out of the blue.”

Both Mim and I highly recommend trying to be “mirabilaries.” It’s fun! Try it.

One response to “A 50-cent Thrill”