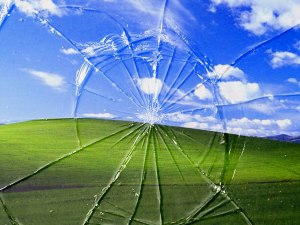 Does it ever seem like your world is shattered? That life is suddenly broken? For some of my family members, that’s what August has been like this year.

I guess I would describe August 2014 along two tracks of events. One track is affecting my broadly extended family. The other track is affecting Mim and me mostly, and a few other unrelated people. I feel like I’ve been running as fast as I can along the “Mim and me track,” but the “broader family track” keeps pulling me over to slow down and cry with my family and wonder what’s happening in our world.

Sandy and Conrad looking out their kitchen window while hospice volunteers did spring yard work.

Perhaps I should begin by explaining who my “broadly extended family” includes. My brother, Danny, married his high school sweetheart, Sandy, shortly after they graduated from high school in the mid-1960s. They had two kids, Cindy and Kevin. As Danny and Sandy matured, they grew in different directions and divorced when their kids were still young. Danny and Sandy still stayed in contact over the years, primarily because of their kids. They both remarried twice, bringing more in-laws and nieces (no more nephews) into the family. We’re a big, complicated (but probably fairly typical) extended family. I think of Sandy as my first sister-in-law. She is still part of my “broadly extended family.” I knew Sandy in high school, even before she dated my brother. I’ve always liked and admired Sandy. She made me laugh a lot with her quick wit. 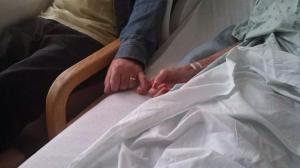 Sandy has been in declining health for the last few years, even though she’s only 67. Several months ago Kevin took the picture of his mother and her husband, Conrad, holding hands when she was in the hospital. Kevin had gone to visit her, and he found them both asleep but still comforting each other.

A few days later she was released from the hospital, to go home on hospice. Conrad would take care of her at home.

On Monday evening, August 4, Conrad went to Subway to get sandwiches. He was killed in a car accident on his way home, on the street right in front of their home.

Sandy was devastated. She lost all will to live. She died 16 days later. Her funeral is today.

On the “Mim and me track,” our farmhouse is moving quickly into its next phase. As you may recall, six years ago we turned the farmhouse into a bed-and-breakfast style spiritual retreat center. We named it Whispering Winds Retreat Haven. A year and a half ago we put Whispering Winds on hiatus and agreed to rent the farmhouse to a family who needed a place to live for a couple years. On August 3rd the renters moved out, five months earlier than planned. We were okay with that because the renters were able to buy a home of their own sooner than they expected, and we really wanted to spruce up the place and try to sell it.

A few days before the renters moved out, I received an email from someone (Jeff) who wanted to talk with me about collaborating on reopening the farmhouse as a retreat center. Eventually Jeff would like to buy the place, but for now he wanted to see if we could work together to reopen the farmhouse as a retreat center. We scheduled a time to get together at the farm and talk. That meant Mim and I had just over a week to “spruce” up the place before our meeting.

We quickly realized that we had a bigger clean-up job on our hands than we had anticipated, and we would need help. Amazingly, within that one week in early August, we had two women from a cleaning service deep-clean the five bathrooms and the kitchen; five men from a landscaping service spend a full day weeding, pruning, and removing three truckloads of brush from the yard; another handyman mow our 3-acre lawn and spread 8 more yards of mulch (he had spread 10 yards earlier in the season); our HVAC service man clean the furnace and repair the central AC; and a friend help us carry a dozen heavy boxes of dishes, glasses, flatware, and other furnishings up from the basement. With all that help, the house was presentable for our meeting with Jeff to explore the possibility of collaborating on a retreat center.

The next week, we had a friend paint walls and ceilings as needed throughout the house, reinstall parts of the kitchen cabinets, and replace the garbage disposal and faucet in the kitchen sink. Mim and I worked, too – mostly moving around furnishings to make the house look like a B&B retreat center again. It was an amazing transformation! Oh, and we also bought a new range to replace the one that had been accidentally damaged beyond repair by trying to clean the self-cleaning ovens with a spray-on oven cleaner. (Caution: Don’t ever do that!)

We were amazed. With the help of half a dozen friends and half a dozen strangers, our farmhouse was completely transformed within a couple weeks – all within the same timeframe between Conrad’s death and Sandy’s death.

The day after our meeting with the retreat guy (which had been a great time for sharing ideas, but probably not the beginning of a retreat collaboration), our realtor showed the house to a prospective buyer. Thanks to all the help we had received over the past week the house and 3-acre lawn were completely ready for showing!

But then everything changed. Our friend Sharon, who was renting one of the condos in the duplex next door to ours, was told that her condo had been sold and she would need to move out within a month or so. Sharon is the friend who had welcomed “Mary,” one of the 93-year-olds we care for, as a short-term roommate because we didn’t have room for her in our condo.

So… that’s what the next phase is going to be in the life of our farmhouse… Sharon and “Mary” are going to move into the farmhouse next month. Sharon may also invite her 90-year-old parents to join her for the winter months. We’ve talked with our real estate agent and have decided to take the farmhouse off the market. It seems pretty obvious that this is where Sharon and “Mary” need to be for the next several months.

That’s August 2014. Track one is filled with sadness. Track two is filled with fast-paced problem-solving and lots of hard work. Between the two tracks, we’ve been able to deeply sense God’s presence, God’s comforting love. I guess that’s why I played “God Will Take Care of You” for the prelude last Sunday in church. The awful August of 2014 demonstrates this truth. We’re not in this world alone. God is with us, as are the friends and family God has sent to comfort us, as well as the kind strangers God has ready to help us with our various challenges.