Last December when I told Mim about the idea of selecting a special word for the New Year instead of making any New Year’s resolutions, she caught my enthusiasm and decided to select a word for herself, too, a word that would help her keep focused on one particular area for spiritual enrichment throughout the year. As you may recall, my special word for 2014 is JOY. I’m having a great time keeping my eyes and ears alert to detecting moments of joy, day by day, and being thankful for all the joy in my life. 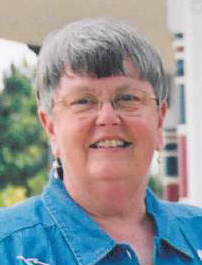 The word Mim chose is ENOUGH. When she told me her word choice, I seriously wondered if she really understood the concept underlying having a special word for the year. ENOUGH didn’t seem like a very inspiring word to me. But after eight months, I’m beginning to understand why Mim chose that word. What’s happened to me by Mim’s word choice is that while finding moments of JOY is the primary theme of my day-to-day living this year, the word ENOUGH has become the secondary theme. I sometimes catch myself thinking about what’s ENOUGH – enough money to pay the bills as well as think about retirement; enough food to feed everyone in our household, but not too much of anything that might spoil; enough time to get my work done, or at least the really important things on my to-do list… 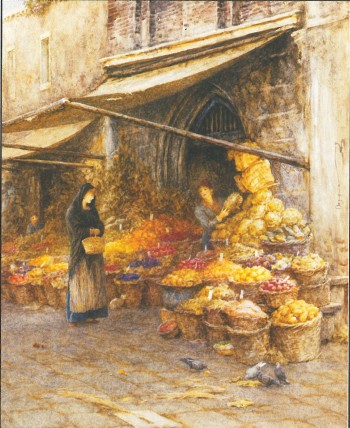 Imagine my surprise when I saw that the theme of Joan Chittister’s Monastic Way pamphlet for the month of August (Mim’s birthday month) is ENOUGHNESS. The painting Chittister selected to illustrate ENOUGHNESS is A Fruit Stall by 19th century English painter, Helen Allingham. The proprietress of the fruit stand is surrounded by dozens of baskets of different kinds of fruits with some fruits piled high against a wall. A woman carrying a small basket is looking at all the fruits to make her selection.

Chittister started her month’s reflections on enoughness with:

In our world, we are at the point in the West where consumption has come to trump need. So now almost no one knows what they really need anymore. But we are wizards at knowing what we want. It’s a universal disease. And it can be fatal.

Throughout the month, Chittister reflected on some of the wide-ranging consequences of not recognizing when you have enough and should stop accumulating more and more and more. On August 12, Chittister wrote:

Later in the month, Chittister’s reflections became a little more political sounding. On August 27 she quoted Franklin Delano Roosevelt, “The test of our progress is not whether we add to the abundance of those who have much. It is whether we provide enough to those who have little.” On August 30 Chittister added, “What does it say about a society that can produce multiple billionaires, hundreds of millionaires, but cannot educate its students or pay enough to feed its workers? It says our time of greatness is running out.” Her tone actually reminded me of the Old Testament prophets who criticized the people from turning away from God’s laws.

Yesterday I asked Mim how it was going with ENOUGH being her word for the year, now that she’s been focusing on it for eight months.  She replied, “ENOUGH concentrates on today – not the future. There is enough food, time, energy, etc. for today. I don’t know the future. ENOUGH helps me concentrate on today.” Then she pulled out an email that a friend had sent her. Her friend quoted a paragraph from the May 28, 2014 issue of The Christian Century magazine.

JUST ENOUGH:  Marilyn McEntyre was at first wary when congregants were asked in a worship service to “write your spiritual autobiography in six words.” Then these words came to her:

“Eat the manna. More will come.”

To McEntyre this was an expression of her ongoing anxieties about “saving and spending, keeping and letting go, prudent stewardship and the practice of generosity.” Her six-word autobiography reminded her of the way her mother lived – not far from poverty yet “rich in trust and stories about just the right amount of food, money, help showing up just when it was needed.”

Mim said she keeps the email with her devotional books and re-reads it frequently. It reminds her to trust God to provide for all her needs.

ENOUGH is a word that can be pondered from opposite directions, from: 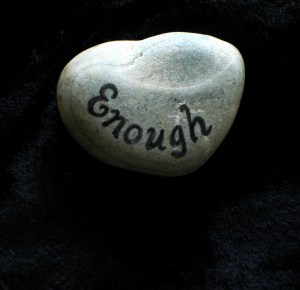