“Congratulations, Floey. You did it. You graduated from Intermediate Class at Dog’s Best Friend Training in Madison. I was surprised your teacher decided to award you your certificate, even though you will have to miss your last class. Apparently you learned everything you needed to know in five classes instead of six. Wow! I guess you’re pretty smart.” 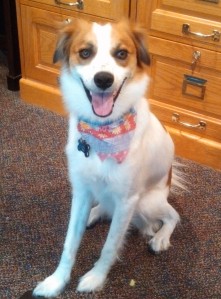 “Thanks, Mom. I knew I could learn all the stuff they wanted to teach us in class, but I learned a lot more, too.”

“What else did you learn, Floey?”

“The most important thing I learned is that there’s more than one RIGHT way of doing things. That’s something lots of dogs – and people, too – never learn.”

“Tell me more about that, Floey.”

“Well, some people and dogs communicate only with hand signals. They don’t use any words at all. At first I thought that was dumb. It’s fun to talk. But then I realized that sometimes there’s a good reason for it, like when you’re outside and a big noisy truck goes by. You can’t hear anything but an engine roaring. But a dog can still see a hand signal. I guess it really makes sense to learn both words and hand signals, so I made sure I learned both in class.”

“That seems like a good idea. I’ll try to remember to use both words and hand signals when I want to tell you something.”

“That’s OK, Mom. It’s not necessary, but it’s nice. Another example of different RIGHT ways of doing things is that some dogs heel on the right side of their person. I always thought dogs had to heel on the person’s left side. But the teacher said either way was RIGHT. At first I was skeptical. I thought the teacher was being too easy on the dogs that were heeling on the WRONG side. But I went and talked to one of the dogs who was heeling on the WRONG side, to politely tell him he was doing it WRONG, and he politely told me to mind my own business and listen to the teacher. I didn’t particularly like that dog.”

“I know which dog you mean. I didn’t particularly like his person either. Fortunately, they seemed to like each other.”

“Yeah. I really liked most of the dogs and people in this class, and I especially liked the teacher. She had so many good ideas, and she encouraged us to pick and choose the ideas that appealed to each of us the most. Boy, is she open-minded.”

“You know, Floey, I just read something about a week ago in Joan Chittister’s pamphlet, The Monastic Way. She said,

It takes humility to accept the fact that there may be other equally good ways to do things than the way we ourselves have always done them. It’s amazing how small our lives can really become. And at our own hand.

“Chittister may be on to something, Floey.”

“I agree. I wish that’s something everyone would learn – people as well as dogs. Maybe the best way to teach the rest of the world is to try to practice open-mindedness as much as we can ourselves. Not everyone gets to go to a class like you did to learn that there’s always more than one RIGHT way to do something.”

“Sounds good to me. Now, do I have any more classes to take, or have I learned everything?”

“Hmm. I’ll have to think about that.” 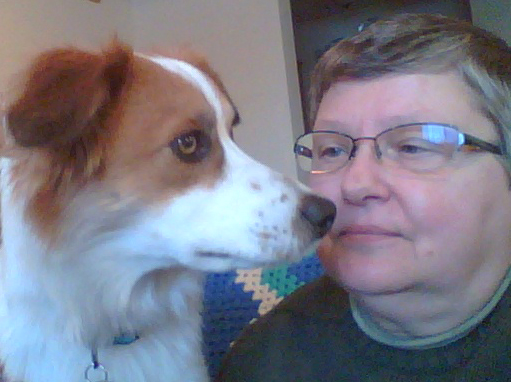 Floey and me thinking really hard about future educational goals.