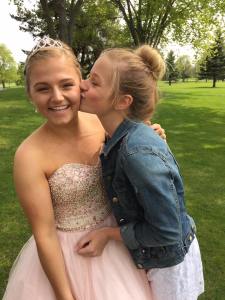 This past weekend I kept checking Facebook on my smartphone, waiting for news and pictures. It was a big weekend for my family. My great niece Mollie was in Fort Worth, Texas, competing at the national championships for gymnastics. Meanwhile, her twin sister Katie was on the prom court of the Cambridge High School Junior Prom. Supporting each twin was a matter of divide and conquer for the family. The father, my nephew Kevin, accompanied Mollie to Fort Worth, and took some great pictures. The mother, Shawn, stayed home, along with the younger sister, Gracie, and they helped Katie get ready for the prom. And they took great pictures, too.

It was an exciting weekend for everyone. But the abundance of blessings was really a mixed blessing. Mollie had to miss going to her junior prom because of it falling on the same date as the national gymnastics competition. Katie had to miss cheering for her twin sister as she competed in Texas because she couldn’t be two places at once. Interesting how blessings and sacrifices can be two sides of the same coin.

Shawn was the first to provide an update on Facebook. It was fun to see Katie all dressed up. It was a beautiful evening for beautiful young couples.

On Sunday, Kevin entered the following update about Mollie on Facebook.

Mollie is the Senior C National Floor Champion. She finished 2nd in the overall. Took 3rd in vault and 5th on bars.

Mollie was awarded an all expense paid trip back to Texas in October because she made the Junior Olympic National Team. She will meet the Olympic coaches and practice for four days.

Words cannot express how proud we are of her. Congratulations Mollie on an incredible achievement.

A tremendous thank you to Aubrie for the dedication and patience coaching Mollie. Thank you to our parents for helping Mollie get to where she is. Thanks be to God for giving Mollie this incredible talent for gymnastics. It will take her farther than she can ever imagine.

Thank you to Danielle J Lynch [Kevin’s sister who lives in San Antonio] and family for making the weekend trip! Thank you Adrienne Lacy [a family friend] and family for coming as well! Thanks to Chase’s sister Rene’ and her husband Patrick for the hospitality and friendship this weekend. It’s nice to have a fan base everywhere we go! 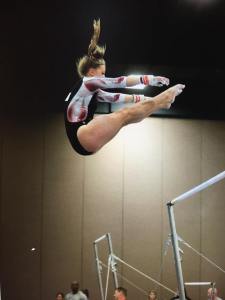 Mollie on Bars – one of four events gymnasts compete in.

Kevin posted several photos he had taken showing Mollie in action. Here’s one of the photos I lifted from Facebook.

My mom, Kevin’s grandma, would have been very proud of both Katie and Mollie. (And Gracie, too, for being a supportive kid sister.) But I think Mom would have been proudest of Kevin. Mom always worried about him. She thought he had way too much energy and creativity for his own good. He was always running. Everything he did, he did fast.

I remember one story Mom told about when she baked and decorated a batch of cut-out cookies for him to take to school to share for his birthday. As usual, he ran as fast as he could to get to the car to go to school, even though this time he was carrying a big round tin full of special cookies. He tripped and fell, and all the beautiful cookies broke into pieces. I’m sure it bothered my mom more than him. He still shared the cookies with his classmates. They tasted just as good whether they were broken or not. It seemed that nothing could slow down his speed of movement nor subdue his enthusiasm for whatever he was doing. (I think his girls all inherited those traits.)

Kevin on stilts – 1984. Note the stepladder and electrical wires.

When Kevin was 13, he decided he’d make a pair of stilts and teach himself to walk around and see everything from a bird’s-eye perspective. After constructing the stilts, he realized that he needed a stepladder to get on the stilts. When he started walking with the stilts, he discovered he was lucky that the stilts were just short enough that he could still walk under the electrical wire that was strung from the pole to the house – without the stilts catching and pulling down the wire. Kevin’s guardian angel was kept very, very busy throughout his childhood.

Mom prayed for all her grandchildren every day. But I think she must have prayed for Kevin at least ten times a day. She knew that praying for him was the best way to keep him safe – just in case his guardian angel was taking a much-needed nap.

I’m thankful that I can be part of this village, that all of us are connected to each other’s lives and well-being. As Joan Chittister said in this month’s “Monastic Way” pamphlet,

There can never be too much kindness in life – either for us or because of us. Every act of kindness makes the world a softer, better place. As Aesop wrote, “No act of kindness, no matter how small, is ever wasted.”

Thanks to everyone reading this post who’s making the world a softer, better place for everyone in their lives.

Mollie and her coach