Almost every day for at least the last ten years, I’ve started my morning in the comfortable sitting area of my downstairs office. I light the seasonal arrangement of candles on the coffee table, and settle into my Lazy Boy recliner. I spend from ten minutes to an hour quietly beginning the day.

Before I start reading, I mentally sing a hymn to focus my mind into a worshipful or meditative state. I don’t sing out loud, because hearing my voice would be an unwelcome distraction. I don’t play the piano because that’s about ten feet away from where I’ve already settled into my chair. Singing the hymn mentally is just the right way to get my soul ready.

The first few years I sang “Holy, Holy, Holy” for this centering exercise. Then I sang “Praise God from Whom All Blessings Flow” for a few years. One year I took a brand new hymnal I’d just received, and mentally sang one or two hymns a day, from page one to the end of the hymnal. Last December I decided to use “O Come, O Come, Emmanuel” to focus my mind throughout Advent. I sang one verse a day, until I came to verse 3.

O come, Thou Wisdom from on high
and order all things far and nigh;
To us the path of knowledge show
and cause us in her ways to go.

From that day on, I’ve mentally sung this verse every day. Even after Christmas. I’m still singing it every morning. I intend to use this song throughout 2020, and I’ve made WISDOM my special word for the year.

If you are a long-time reader of this blog, you know that I’ve been selecting a special word each year for the past seven years.

I expect 2020 will continue to be a year of transition for us, from full-time caregiving into gradual retirement, whatever that means. That’s what Mim and I need to learn. And that’s why WISDOM seems like the perfect word for me to focus on this year. And that’s why mentally singing the third verse of “O Come, O Come, Emmanuel” is the perfect way for me to begin each day. 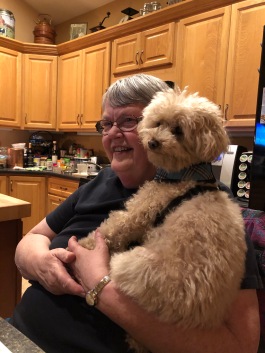 Mim sharing our love with Quincy, one of Floey’s best friends. 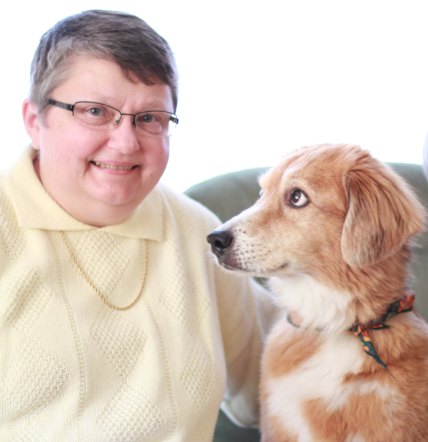 Abbey had been sitting on the floor next to the patio door, staring out at the pond for a long time. It was snowing again. Big flakes were drifting down, adding to the eight inches already on the ground. I wondered if she was as tired of the snow as I was. 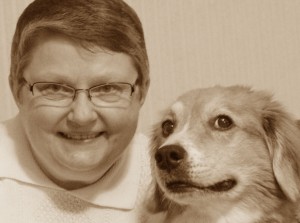 I called to her, “Hey, Abbey. A penny for your thoughts.”

“Oh, hi, Mom. My thoughts are pretty deep today, just like the snow.” She smiled with that comment. “It’s New Year’s Eve today, and I’ve been thinking back over all that’s happened over the past year.”

“That’s a lot to think about, Abbey.”

“It sure is, Mom. It’s been quite a year for all of us. Have you been thinking about everything that’s happened, too?”

“I sure have. A year ago, as I anticipated what both the highlights and the challenges of 2013 might be, I thought a lot about getting my first two books published, but I had no idea that I’d get married!”

“Yeah. That was quite a surprise!” Abbey continued, “State and national politics really do affect us on a personal level. Just think, Mom, you and Mim lived together 40 years before you could get legally married. I bet you’re really thankful that you’re finally married.”

“That’s for sure!  But you know what, Abbey? You’re very right about how much politics on the national and state level really affect our personal lives – even beyond the gay marriage issue. I think almost everyone in our country – at least most of the people I know, including most of the people in my family, have very strong opinions on almost every issue that’s in the news. That includes religious, social, environmental, economic, health care, and education issues – you name the topic, and everyone holds a different opinion. What’s so sad is that the local, state, and national news coverage of these issues seems to encourage polarization rather than understanding. Very few people are interested in trying to understand why someone thinks differently than they think.” 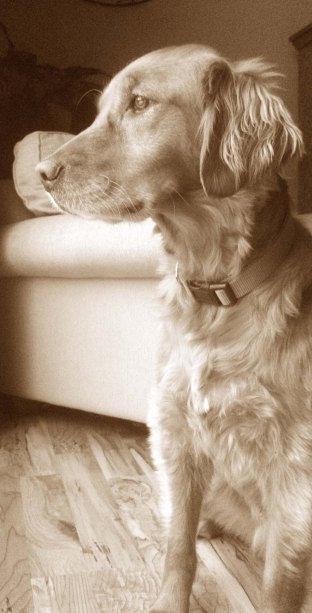 “You have a point, Mom. Piper is so Republican, it’s no longer fun to play with her. Just because she gets all the treats she wants, and she’s in perfectly good health, she thinks it’s okay to be oblivious to the needs of all the other dogs in the world who don’t have a home and loving family.”

“I suppose, Mom. But she’s so arrogant – thinking she’s so right and I’m so wrong.”

“Well, how about you? Don’t you think you are right and she is wrong about everything?”

“Well, yes. But that’s different. I really am right!”

“I think you need to try a little harder to really understand why Piper thinks like she does – and why you think differently. Some of the highlights of 2013 for me are conversations I have had with some of my nieces and nephews. I hate to say it, but most of them are Republican, too. But we have had some really good conversations – both face-to-face and by email – about why we each believe some of the things we feel very strongly about. It amazes me that we all share the same cultural and religious backgrounds, yet we hold such different opinions on every issue that’s in the news. But it’s good to talk about our shared values and differing opinions. The more we talk, the better we understand each other, even if we all “stick to our guns” on every issue. The more we understand each other, the more we can respect each other’s opinions. And, most important, the more we can love each other, and not be distracted by our differences.”

“Wow, Mom. You really feel strongly about trying to understand each other, even when you know you’ll never agree.”

“Yes, I do, Abbey. But most important, we need to keep loving each other. I hope you and Piper can get back to playing together, and still be friends. The Bible says that love is the greatest gift. The most important thing for us to do in our lives is to love God and to love each other.”

“But Abbey, I’ve been doing most of the talking. Tell me about your deep thoughts – the one’s I’m paying you a penny for.”

Tucker – our next door neighbor

“Well, my thoughts are kind of related to your thoughts. Over the past year, I’ve gained quite an important new insight. You know how I sometimes bark aggressively at other dogs. I’m just trying to let them know that I’m the boss around here. They need to know that. That’s all. I’m not mad at them. Well, Tucker, the dog who moved in next door last summer, he barks a lot and sounds pretty aggressive. Whenever I go out the front door, if he’s already out in the yard, he barks ferociously at me. I don’t want to fight him, so I just ignore him. But that made me realize – I really don’t like being barked at. And that made me think – I bet all the dogs I bark at don’t like being barked at either. I never thought about that before. Seeing a barking dog from the perspective of the dog being barked at, gave me new insights. I think I might try to be a little more soft-spoken to the other dogs in the neighborhood. That’s my biggest new insight of 2013, and my resolution for 2014.”

Mim, Marian and Abbey wish you a Happy New Year!